Discover Dorean Fashion where my paintings meet the finest silk. 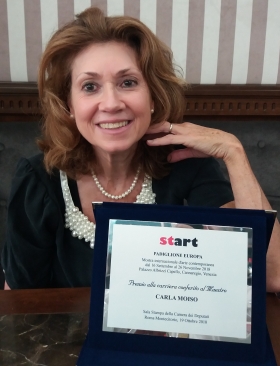 Carla Moiso was born in Venice, Italy. This extraordinary city is the source of her inspiration and creativity, as the transparency and reflecting images of the lagoon are palpable in her strokes.
An engineer by training, Carla has pursued her artistic inclinations throughout her life culminating in a decision to leave engineering for a full time artistic career early in 2000. The warm and bright colors of the Cote d’Azur of in the South of France, where she has been living for over a decade, inspire her work and permeate her choice of colors, especially in her landscape paintings. Her first major recognition was in Roquebrune Cap Martin, in the South of France,  an individual exhibit well received by the public and critics, followed by numerous exhibits in France and Italy. Her paintings won several prizes and recognition by critics  and were selected for numerous prestigious events and exhibits, one of the most noteworthy her participation in the 2004 Carrousel du Louvre in Paris – a selection from among 10,000 competitors.  Other significant exhibits include an invited individual show in the Municipality of Abano Terme (Padua) in 2007.  She also won the jury prize at the “Biennale d’Arte Internazionale del 2010” in Rome  and Public Prize in Monte-Carlo. From 2011 to 2015 she had participated  in the  Biennials in Florence, in Verona, in Palermo and in Barcelona. Also in 2015 he was present at the “Grazie Italia” exhibition in the Guatemala Pavilion at the 56th Venice Biennale and at the end of the year he took part in exhibition in Los Angeles. After being awarded a prize in classical painting in Moscow, in 2017 she designed two individuals shows in Venice (Palazzo Zenobio) and in Piacenza at the “Studio C” Gallery. In April he took part in the prestigious Triennale di Roma (in the monumental complex of the Vittoriano) inaugurated by Achille Bonito Oliva and Radini Tedeschi, and at the end of the year she had participated in exhibition in Miami.

In the fall 2018 she will take part in an exhibition in Vernadsky museum in Mosca, and in Venice (Palazzo Albrizzi Capello) ( “Padiglione Europa” Exhibition) within the 16th biennial architecture with carere award.